HIF’s President was the recipient of the Michael Kovats Medal of Freedom on the 9th Annual Hungarian Charity Ball.

The 9th Annual Hungarian Charity Ball was held in Washington on May 9. The evening will be memorable for the Hungary Foundation because of the award received by Dr. Tamás Fellegi, President of the organization.

The 9th Annual Hungarian Charity Ball was hosted by Sheraton Premiere at Tyson’s Corner. Over the past decade, this event has raised tens of thousands of dollars for worthy causes and it was also very successful this year. The proceeds of the 9th Ball will go to support the Hungarian-American community with educational and charitable programs. 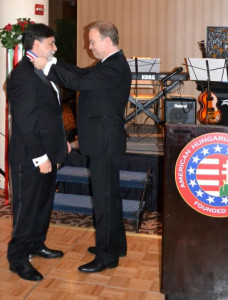 Among the spechees and different performances, the award ceremony was one of the highlighted moment of the evening. As one of the main sponsors of the Charity Ball, the American Hungarian Federation (AHF) established two awards. The first one is the “AHF Service Award” for recognizing members of the community, Hungarian and non-Hungarian alike, who have made special, outstanding contributions to the community. The second one is the Michael Kovats Medal of Freedom for recognizing outstanding lifetime achievements and selfless contributions to freedom, democracy, and Hungarian society and culture. We are really proud that this year’s recipient of this medal was Dr. Tamas Fellegi, President of The Hungary Foundation.

Here is a quotation from the detailed event summarypublished on the AHF’s website regarding Dr. Fellegi’s award: „The Hungary Foundation is an independent, American non-partisan and non-profit organization committed to strengthening the understanding and cooperation between Hungary and the Unites States of America. The Foundation is the first of its kind in the long history of the Hungarian Diaspora. We are so very grateful for his and the Foundation’s work.”