A Remembrance of the Holocaust in Hungary

The exhibit presents a historical account of the Hungarian Holocaust in observance of the 70th anniversary of the deportation and extermination of the Hungarian Jews. The exhibit presents the greatest Hungarian tragedy of the last century through photographs and facsimile documents. It opened on January 23, 2014 at the UN New York Headquarters and will run until January 31, 2014. The exhibit was organized by The Carl Lutz Foundation, Budapest in cooperation with the Tom Lantos Foundation for Human Rights and Justice and the Hungarian American Coalition, and was sponsored by The Hungary Foundation.

On behalf of the Board of Trustees of The Hungary Foundation let me highly commend the three organizations for putting together this very thoughtful and respectful exhibition.

The occasion is the 70th anniversary of the Holocaust in Hungary. But we all know that the Holocaust did not start in 1944. What happened in Hungary after March 19, 1944 when the German troops occupied the country was the beginning of the end. The Holocaust of the Hungarian Jewry was the final stage following years of discrimination, exclusion, deprivation, humiliation, and forced labor in the military.

There were two circumstances that made the extermination of Hungarian Jews especially tragic.  The first is that it was the Hungarian Jews, of all Jewish people in Eastern Europe, who got the farthest in assimilation to the prevalent culture and society. This provided a false sense of security to many and made them ignore the evident signs of the fast approaching horror.

The other circumstance was the timing. The Soviet military was already close; the Western Allies invaded Normandy and started to liberate Western Europe. The end of the war was coming!  And, at that very time the deportation trains were running and running with hundreds of thousands of Hungarian Jews to Auschwitz.

This time factor increased the moral, historic, and legal responsibility of all those who willingly or not, but participated in the deprivation and deportation of six hundred thousand Hungarians who happened to be born to Jewish families. This responsibility applied especially to those leaders of the country who were in decision making positions, who could have, and should have had demonstrated courage, humanity, and statesmanship.

Some, probably many, did. I bow my head before their effort to save the values of our Judeo-Christian civilization, and certainly recognize their courage they showed against the tide. The descendants of the survivors have a special obligation to remember the sometimes extraordinary display of courage and care these people showed at the age when evil became banality, to use the expression of Hannah Arendt.

Therefore, it is my personal obligation to remember those people whom I never met, whose names I do not know, but who helped my 18 year old mother survive in 1944-1945 by providing her hiding places, faked ID documents, and food. I also have to recognize those unknown persons who helped my father survive by helping him and his family to find shelter in a Red Cross protected house in Budapest.

Eli Wiesel wrote in his book “Night”, I quote, “For the survivor who chooses to testify, it is clear: his duty is to bear witness for the dead and for the living. He has no right to deprive future generations of a past that belongs to our collective memory. To forget would be not only dangerous but offensive; to forget the dead would be akin to killing them a second time.” As time passes by, this thought is getting even truer and more important. We have to talk over and over again the individual stories of the Holocaust. We must not allow the Holocaust to become painful statistics, frozen into the big picture of history. We must continue to give faces to the numbers.

Recently, I was honored to testify before the United States Congress on the issue of current anti-Semitism in Hungary. In my testimony I acknowledged the alarming rise of racism and anti-Semitism in Europe, including my home country.  We have witnessed growing brutality and hatred towards minorities in many parts of Europe, including the Roma minority, Jews, and people with different sexual orientation. We witness the unfortunate growth of hate speech and hate crime all over Europe. We also witness how smartly the extremist, racist political groups misuse the first amendment to the US Constitution and hide behind free speech when they operate their Internet servers on US soil. We have to make sure that both our governments and the general public are fully aware of the threats these people may pose to human dignity, human rights, and ultimately, to human lives.

I was born more than 10 years after the Holocaust in Hungary. To me the most important messages of the Holocaust are: hope and perseverance. One of the most spiritual points of my life was when I visited Yad Vashem in Jerusalem. You make this tour of sorrow and desperation. At almost every step your legs are getting heavier and you ask a hundred times: why. Then, at one point you leave the exhibition room and enter a balcony of sunshine and the emotionally overwhelming view of Jerusalem, the capital of the Jewish state, Israel. Hope and perseverance – as the great American writer, Ernest Hemingway writes in “The Old Man and the Sea”: “Man is not made for defeat. A man can be destroyed but not defeated.”

In terms of numbers, Hungary has one of the largest Jewish communities in Europe. Most of who are native Hungarians, living in Hungary for several generations. In Hungary today, you find the rebirth of Jewish culture. Jewish life in Hungary started to blossom from day one of democracy. Families returned to their roots, with Chabbad the chassidim returned to Hungary, an extremely popular summer camp brings together Jewish children from all across Hungary. A new synagogue will be built in Csepel for the first time in 80 years and the Main Synagogue in Dohány utca, which was for a long time the second largest synagogue in the world, has become a touristic and cultural hub. Budapest’s formerly abandoned Jewish district is now the liveliest part of downtown Pest. The Lauder Yavne School is one of the best educational institutions in the country, and the Israeli Cultural Institute recently founded the Herzl Center in Budapest. The annual Jewish Summer Festival brings thousands to Budapest from all across Europe.

On the occasion of the 70th anniversary of the Holocaust we mourn our dead. We draw lessons for the present and the future. We take note about the threats and dangers of racism and extremism. It is all the more important to register that the mainstream political forces in Hungary, be Right or Left, are neither racist nor anti-Semitic. There is a clear line of demarcation between political anti-Semitism and mainstream political parties, regardless of right or left, and this is very important.

We do have hope. However, our job with the past is not done yet. The tragedy of the Holocaust was the tragedy of the Hungarian nation. By excluding the Hungarian Jews from the Hungarian nation, by sending them into extermination camps, Hungary lost a large part of its better future. I think that both the political and cultural elites, as well as the general public still have a long way to go until we can develop a truly mutual understanding of this tragic part of our history. The 70th anniversary is a good occasion to get closer to this goal.

Thank you for your attention! 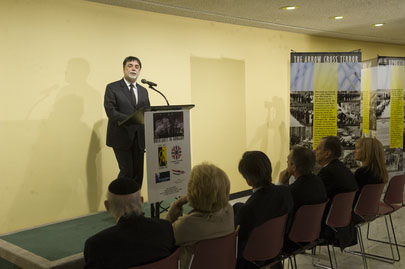 There are some photos about the opening ceremony in the gallery below.