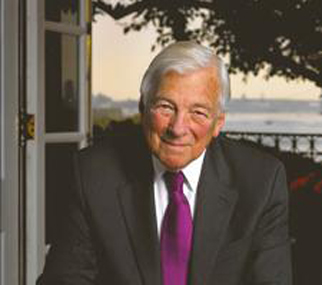 Members of the Hungarian American Coalition are saddened to learn that John C. Whitehead, the Goldman-Sachs executive, diplomat, and active supporter of pro-Hungary initiatives, passed away peacefully on February 7 in New York, NY.  He was 92 years old.

John Cunningham Whitehead was born on April 2, 1922, in Evanston, IL. Whitehead grew up in Montclair, NJ, where he became a committed Boy Scout.

He graduated from Haverford College in Pennsylvania in 1943 before joining the U.S. Navy. He participated in the invasions of Normandy, Iwo Jima and Okinawa during World War II.

Whitehead joined Goldman Sachs in 1947 and became a trusted lieutenant to Sidney Weinberg. In 37 years at Goldman Sachs, eight of them as co-head, Whitehead developed a sales team to market the firm’s services, laid out a code of ethics and spearheaded international growth. From 1976 until his retirement in 1984, he ran the Manhattan-based firm, then a private partnership, with John L. Weinberg,

While at Goldman Sachs, Mr. Whitehead traveled to Vienna in 1956, just as the revolution in Hungary broke out. He was deeply affected by the plight of Hungary’s freedom fighters and took significant measures to assist them. He personally chartered a Pan Am airplane to Vienna, collected donations for medical and communications supplies, and led three boats from Vienna and Budapest to deliver the supplies to the revolutionaries.  “Did we make a difference?” he recalled later. “I don’t know, but we had to do something.”

Whitehead left Goldman in 1984 to become Deputy Secretary of State under President Ronald Reagan, and focused on relations with Central and Eastern Europe. In 1989, President Reagan awarded Mr. Whitehead the Presidential Citizens Medal for his extraordinary commitment to public service.

When Reagan’s term ended in 1989, Whitehead re-entered the private sector as chairman of AEA Investors LLC and took on a variety of roles, including chairman of the Federal Reserve Bank of New York.

Whitehead also became Chairman of the Hungarian-American Enterprise Fund, established in 1990 as the first fund to invest in the Hungarian private sector and facilitate the growth of local entrepreneurs.  Among other initiatives, Mr. Whitehead supported the Citizens Democracy Corps, which assisted with Hungary’s transition to democracy, and the Mellon Foundation, which funded important institutional strengthening projects such as the restructuring of the Prime Minister’s Office under József Antall.

Whitehead held honorary degrees from many universities, and was active in a great number of educational, civic and charitable organizations.

In 2009, the Coalition honored Mr. Whitehead for his commitment to public service and to the Hungarian nation, and for his contribution to Hungary’s quest for freedom in October of 1956.

← Prev: 10 Hungarian students in the US with HIF grant Next: Board Decisions for Unsolicited Grants 2015 →