Hajnalka Tóth from Budapest, Hungary arrived to Washington this fall and will spend 4 months at Meridian Center for Cultural Diplomacy (MCCD). With HIF’s support, the Hungarian American Coalition’s John N. Lauer Leadership Training Program (formerly Coalition Internship Program) will be hosting seven interns in 2019 to provide first-hand experience at various Washington-based institutions. Internship participants are also expected to complete a Coalition research project that enables them to become familiar with the Hungarian-American community. 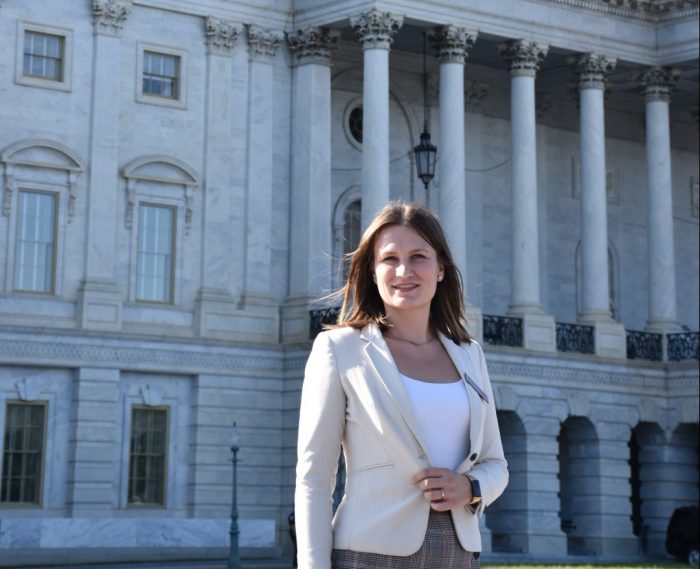 Hajnalka holds an undergraduate degree in Communications and Media from Corvinus University Budapest (Budapest, Hungary) and she has recently obtained her Master’s degree in International Relations from the same university. Alongside her university studies, Hajnalka pursued various internships: she participated in the Kőrösi Csoma Sándor Internship Program helping the Hungarian diaspora in Geneva, Switzerland for six months in 2014, and she was a summer intern at the Hungarian Institute for Foreign Affairs and Trade working for Máté Szalai, expert on Middle Eastern affairs between June-August 2018.

Prior to her internship in DC, Hajnalka worked as a news anchor and editor for MTVA, Hungarian Public Media’s 10-minute English-language news segment, Hungary Reports since 2015. Hajnalka is interested in media relations, public diplomacy, social media’s effect on nation branding and image building, intercultural interactions and international relations. She speaks English and French fluently and German on a basic level.

“I believe that I will learn a lot from the program and the people I will work with, and that my professional development will also greatly benefit from pursuing this internship. I am very excited to gain more experience in intercultural interactions and international relations.”

Through assignments to think tanks and non-government organizations, LTP participants learn about the workings of both the U.S. government and the non-profit world. Their experience helps them establish contacts in the U.S. in their chosen field, and motivates them to enter public service in their country of origin.

Hajnalka with her colleagues at Meridian