Hungary and the United States jointly erected a statue in honor of George Herbert Walker Bush, the 41st president of the United States, on the occasion of the 30th anniversary of the fall of the communist regime in Hungary. HIF’s Chairman of the Board, Ambassador April H. Foley and Board Member Governor Pataki attended the ceremony which also recalled the historic speech the American President made in Budapest during his official visit to Hungary in 1989. 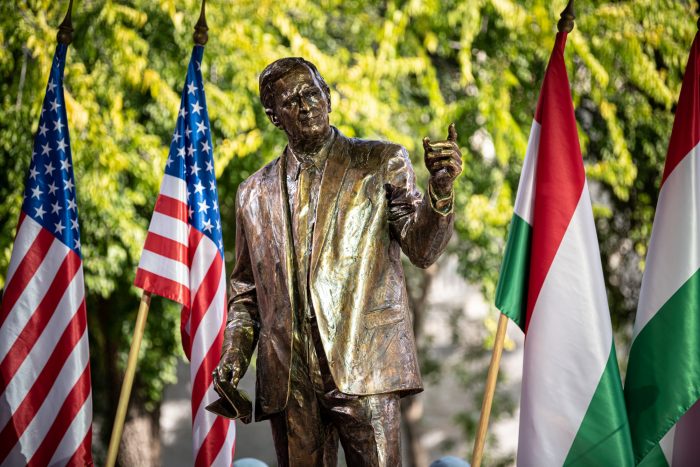 “The ugly symbol of Europe’s division and Hungary’s isolation is coming down, as the barbed wire fences are rolled and stacked into bales. For the first time, the Iron Curtain has begun to part. And Hungary, your great country, is leading the way. – George H. W. Bush (July, 1989)

The statue pays tribute to President George H. W. Bush, “the statesman who helped shape the future of Europe and Hungary”. George H.W. Bush was the first sitting U.S. president to visit the Hungarian capital. His speech on July 11th, 1989 at Budapest’s Kossuth square became one of the iconic moments in Hungarian history. At the time, President Bush understood the significance of efforts to transform Hungary into a free and democratic society.

“Today Hungary is opening again to the West, becoming a beacon of light in European culture. And I see people in motion — color, creativity, experimentation. I see a new beginning for Hungary. The very atmosphere of this city, the very atmosphere of Budapest, is electric and alive with optimism. Your people and your leaders — government and opposition alike — are not afraid to break with the past, to act in the spirit of truth.” – the President said in his remarks to Hungarian students and Faculty at Karl Marx University in Budapest on July 12, 1989. 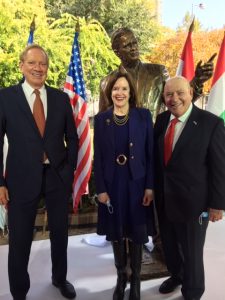 During the Bush presidency, Central and Eastern Europe underwent tremendous changes. President Bush is rightly recognized for the contributions he made over a long career in public service, including as president and Vice President, to help end the Cold War in Central and Eastern Europe and to support the development of Eastern European countries to transition to market economies and establish democratic institutions.The inauguration of his statue took place over thirty years after the collapse of the Berlin Wall.

Prime Minister Orbán lead the ceremony on behalf of the Hungarian Government and Assistant Secretary of State for Educational and Cultural Affairs at the Department of State Marie Royce as well as Ambassador David Cornstein represented the Government of the United States.

April H. Foley, former US Ambassador, and Chair of the Board of HIF, and George Pataki, former New York State governor, member of the HIF board attended the unveiling ceremony. They were deeply touched by the commemoration of this iconic milestone in history.

“In 1989, communism was falling, Hungary ‘s long-delayed dream for freedom became within reach, and US President George H. W. Bush made an historic visit to Budapest to offer Hungary the embrace and assistance of the West. Today that emotional moment in history was memorialized with the unveiling of a statue of President Bush in Szabadság tér.” – April Foley

Unveiling of the statue by Viktor Orbán, and David Cornstein

HIF chair of the board, Ambassador April Foley

First Lady Barbara Bush holds an umbrella for President Bush as Hungarian President Bruno Straub speaks during the welcoming ceremony in Budapest, Hungary, Tuesday, July 11, 1989
← Prev: Georgetown Graduate Launches Career at US Institute of Peace Next: Leading with Passion and Compassion from the West Coast to Budapest →