Dorka Takácsy from Hungary is taking part this fall in with the support of HIF in the Leadership and the American Presidency (LTAP) program, organized by The Ronald Reagan Presidential Foundation and Institute and The Fund for American Studies. Dorka will be interning at the National Defense University’s Eisenhower School for National Security and Resource Strategy, while attending George Mason University. 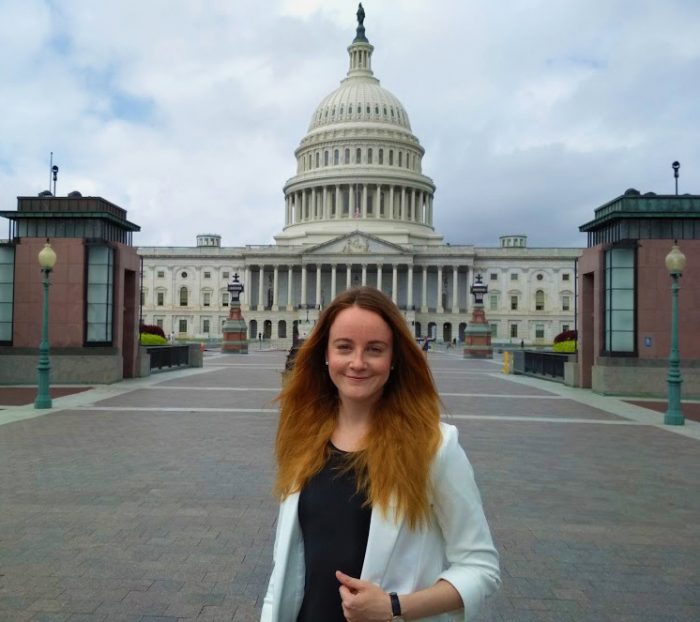 She is a former student of Brussels’ ICHEC Brussels Management School and Moscow’s Pushkin State Language Institute, as well as a proud alumna of the European Academy of Diplomacy and the STRATPOL Strategic Policy Institute’s Young Professionals program. In addition, she speaks six languages.

Dorka previously worked in the Italian NGO sector for Mine Vaganti and in the Hungarian community of Montréal under the auspice of the State Secretary of Hungarian Communities Abroad. She also interned for the Kremlin Watch program analyzing disinformation. Having her main focus on Russian foreign policy, she wrote her MA thesis on the mental background of the Russian public opinion’s differing approaches to the annexation of Crimea and the idea of that of the Donbass.

In the upcoming months, Dorka will be interning at the National Defense University’s Eisenhower School for National Security and Resource Strategy, where she is contributing to various research projects. The organization prepares selected military officers and civilians for strategic leadership and success in developing national security strategy and in evaluating and managing resources in the execution of that progress.

“During my studies I learned a lot about how the US foreign policy changes under different presidencies. Now I would like to gain a more thorough understanding about its domestic politics and decision-making processes to see the bigger picture and to comprehend its foreign policy decisions better. This program provides me a firsthand knowledge on the functioning, priorities, and various approaches of the different US presidencies.”

In the future, Dorka plans to work on Russian-Hungarian relations and Russian foreign policy analysis.

The Fall Széll Kálmán Public Policy Fellowship program is a full scholarship for students from Hungary to participate in The Fund for American Studies‘ Capital Semester program in Washington DC. Capital Semester students can choose from several tracks including Leadership and the American Presidency, International Affairs and Journalism.

The 15 week program that runs from August 22 to December 8, 2018, includes an internship placement in Washington DC, academic credit from George Mason University, housing in the Capitol Hill neighborhood of Washington, DC a variety of guest lectures and briefings, as well as opportunities for professional development and networking. HIF’s scholarship covers full tuition and a living stipend for the duration of the program.