In our new article series titled Organizations in Focus, we would like to introduce a Hungarian American organization every month. We are carefully selecting these organizations from all around the country. Our aim is to encourage people to get to know each other and to take part in community activities. Let’s start with one of the oldest and largest ethnic organizations in the United Sates, the American Hungarian Federation (AHF), which was founded in 1906 in Cleveland, Ohio.

The American Hungarian Federation® (AHF) is a national, non-partisan, all-volunteer, independent, non-profit, charitable and educational organization representing the interests of its members and the Hungarian-American community.

AHF was established as an association of Hungarian societies, institutions and churches to “defend the interest of Americans of Hungarian origin in the United States.” The American Hungarian Federation strives to unite the American Hungarian community through work that supports common goals. Over the past 100 years, AHF’s mission has broadened to include support of people of Hungarian descent on both sides of the Atlantic and in the successor states of the Carpathian Basin. 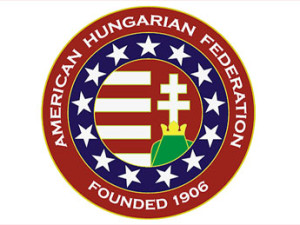 AHF’s logo was designed by Bryan Dawson, who is now the Executive Chairman of the organization. The 13 stars represent the original 13 colonies during the American War of Independence in which the Founding Father of the U.S. Cavalry, Col. Michael Kovats de Fabricy, died while leading the Continental Army cavalry he had trained in Hungarian Hussar tactics against a British siege of Charleston in 1779. At the “heart” of the logo is the historic Hungarian Coat of Arms illustrating pride in heritage and the goal to serve the interests of the members and the Hungarian-American community in these United States. The logo represents Hungarian-American loyalty and unwavering historical commitment to the United States and to freedom, democracy, human and minority rights, and the ideals of forbearers who, like Col. Kovats or the 1956 Freedom Fighters, were willing to make the ultimate sacrifice for that freedom, “Fidelissimus ad Mortem / Most Faithful Unto Death.”

AHF has been organizing several events during the years. In 2013, AHF hosted a reception in Honor of the 1956 Hungarian Revolution. The event was held at the National Press Club on October 18, 2013. The guest speaker was Ferenc Kumin, Deputy State Secretary for International Communications, Hungarian Prime Minister’s Office. Bryan Dawson, AHF Executive Chairman, served as Master of Ceremonies and would deliver the keynote address, “I am a Child of 1956.” He recognized honored guests from the Hungarian Embassy, the Woodrow Wilson Center, the National Press Club, the US State Department, the Polish American Congress, the United States Information Agency (USIA), students from local universities and others.

In the 21st century, AHF continues its tradition of helping those in need and supporting educational and cultural preservation programs. AHF continues to support the Hungarian Scholarship Fund and the Hungarian Scouts, helped the Hungarians of Louisiana rebuild after Hurricane Katrina in 2005, and in 2010 – 2011, raised over $200,000.00 to help victims of devastating flooding and Toxic Sludge. AHF also continues to raise its voice and regularly calls attention to gross violations of human and minority rights against Hungarians in the Carpathian Basin.

Next: The Hungarian Human Rights Foundation →