Tamás Fellegi was President and CEO of the Hungary Foundation from its founding to 2015. He is currently Managing Partner of EuroAtlantic Consulting and Investment Corp., an international consultancy firm. He was minister in the Hungarian government between 2010 and 2012. He was also Hungary’s Chief Negotiator with the International Monetary Fund and the European Union on financial matters. From January to June 2011, he was the President of the European Union’s Energy Ministers’ Council, Climate Policy Ministers’ Council, and Development and Cohesion Funds Council. 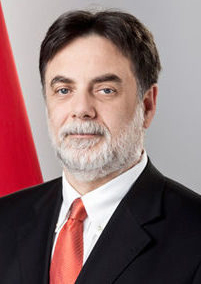 He also served as Special Government Commissioner for Hungarian-Chinese, Hungarian-Russian, and Hungarian-Ukrainian economic relations. Prior to that, he was Minister of National Development, in charge of EU cohesion and regional development funds, energy and climate change, transport, ICT.

A lawyer by education, he graduated from Eötvös Loránd University, Budapest, in 1981. Upon acquiring his legal degree, he worked at the Institute of Social Sciences, and concurrently held a position of assistant professor at the Faculty of Law of the Eötvös Loránd University. He was also one of the founding editors of the periodical Századvég. In 1985 he acquired an IREX Fellowship which he spent at the Russian Research Center, Harvard University.

In 1987, he returned to United States. He completed Graduate School and acquired a PhD from Political Sciences at The University of Connecticut. He spent a year in Rochester as a senior post-doctoral fellow at the W. Allen Wallis Institute of Political Economy studying and researching the privatization practices of the post-Communist countries of Central Europe, Russia and China. In 1993, he returned to Hungary and until 1997 taught at the Political Science Department of the School of Government and Law, Eötvös Loránd University, as well as at the Political School of Századvég. Between 1993 and 1994 he was the political counselor of Viktor Orban, Fidesz’s chairman, prime minister of Hungary (1998-2002, 2010-today) and the Managing Director of DAC (Democracy After Communism) Foundation.

After he left academia in 1995, he established EuroAtlantic Consulting to advise international clients, such as Philip Morris, Masterfoods (Mars Inc.), RWE, Paks Nuclear Power Plant, MOL, HBO, Microsoft, and UPC (Liberty Media). Between 1996 and 2000 he was an Executive Director of Hungarian Telecom (MATÁV Rt.), then a deputy CEO in charge of regulatory and government relations. From the summer of 2000 he became the CEO of EuroAtlantic Inc., and between 2007 and 2009 he was the Managing Director of Kapsch Telematic Services. From 2008 to 2010, he was principal shareholder and CEO of Infocenter.hu Media Investment Inc., one of Hungary’s largest privately owned media groups.