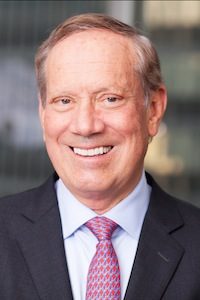 Pataki grew up in upstate New York working on the family farm where he learned the power of discipline, community, and hard work. His paternal grandparents, János and Erzsébet Pataki were immigrants from Hungary. After graduating from Columbia Law School, Pataki practiced law, he was a partner in the New York law firm of Plunkett & Jaffe until 1987. He was elected mayor of Peekskill, New York in 1981, and served in the New York State Legislature as an assemblyman and then a senator from 1985 to 1994, before becoming governor. He was elected New York State’s 53rd Governor in 1994 and won re-election in 1998 and 2002.

During his tenure as New York’s chief executive, Governor Pataki advanced award-winning, cutting-edge policies in the renewable energy and environmental fields. His initiatives included the protection of over one million acres of open space, the adoption of the Regional Greenhouse Gas Initiative, the implementation of the nation’s first green building tax credit, landmark brownfield legislation and programs to enhance the production and use of alternative energy like biodiesel, ethanol, fuel cells and clean coal.

He is currently president of his own small business, The Pataki-Cahill Group, that works in energy, infrastructure, and clean-tech and a Counsel with Chadbourne and Parke LLC, where his practice focuses on energy, environmental and corporate matters.

George and his wife Libby Pataki have been married for over forty years. They have four children; Emily, Teddy, Allison, and Owen and two dogs named Balto and Bradley. Emily is a former attorney currently focusing on raising her children. Teddy served as a Marine officer in Iraq, works for the Knights of Columbus, and is a father. Allison is a historical fiction novelist, and the New York Times bestselling author of The Traitor’s Wife and The Accidental Empress, and their youngest son, Owen, is an Army officer who recently returned from Afghanistan and will attend grad school for film. Allison is also an Ambassador of the ReConnect Hungary program, a cultural immersion program for young Hungarian Americans.