Edith Lauer was born in Budapest where at age 14 she was privileged to witness the life-defining experience of the Hungarian Revolution. After escaping to Austria, her family eventually settled in Maryland, where she met and married John N. Lauer in 1963. She finished her university studies at Texas A &amp; M University, earning B.S. and M.A. degrees in English and Spanish, and had two daughters, Kriszta and Andrea. 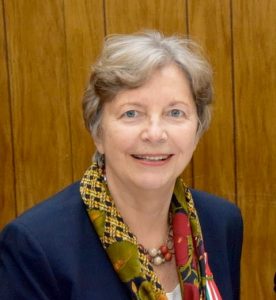 Ms. Lauer was one of the founders, first President, then Chairman, and presently is the Chair Emerita of the Hungarian American Coalition, a nationwide 501©3 nonprofit organization, founded in 1991, to promote public understanding of issues of Hungarian American interest. As a Hungarian American community leader she was invited to several key White House discussions on NATO expansion in 1994-98 with President Clinton, Vice President Gore and other U.S. officials. As the leader of the Coalition’s strong advocacy for Hungary’s inclusion in NATO, Ms. Lauer organized three conferences – in Budapest, Debrecen and Miskolc – to acquaint Hungarians before the national referendum with the advantages and responsibilities of NATO membership.

During her tenure at the Hungarian American Coalition she was instrumental in establishing many Coalition projects in the United States, Hungary, Slovakia and Romania. These include conferences, scholarships in U.S. universities for Hungarian students, American visits for Hungarian officials, literary awards for Hungarian writers in Slovakia, sponsorship programs for Hungarian students and schools in Romania and Carpatho-Ukraine, training workshops in Slovakia, among many others. She has continuously maintained a good working relationship with American ambassadors in the region, with leaders in Hungary and in the historic Hungarian communities, as well as Washington decision-makers. Since 1991, she has visited the region dozens of times to assess needs and to provide organizational and funding support to maintain the educational, cultural and human rights of the historic Hungarian minority communities in those countries.

She has served on the board of several Hungarian and American non-profit organizations, including the Hungarian Communion of Friends, the National Committee of Hungarians from Slovakia, the Madach Posonium of Slovakia, Case Western Reserve University, the Cleveland Council of World Affairs, and others. The Lauer family’s Pannonious Foundation provides funding for educational and cultural institutions and projects in the Carpathian Basin.

Ms. Lauer is the recipient of various awards for her work, including the Hungarian Heritage Award (Hungary, 2002), the Brother Julianus Award (Transylvania, Romania, 2002), the Hope Ball Award (New Jersey, 2003), the Medal of Merit from the President of the Hungarian Republic (2004), the George Washington Award of the American Hungarian Foundation, and she was the Cleveland Hungarian Heritage Society’s Honoree in 2006. In 2007 she received the Rakoczi Foundation’s Pro Libertate Award in Toronto, Canada, and in 2011 Pres. Pal Schmitt presented her with the Order of Merit of the Republic of Hungary.