Ambassador Kurt Volker is a leading expert in U.S. foreign and national security policy with some 30 years of experience in a variety of government, academic, and private sector capacities. He currently serves as Executive Director of the McCain Institute for International Leadership, a part of Arizona State University based in Washington, DC.   He served as U.S. Ambassador to NATO in 2008-2009. 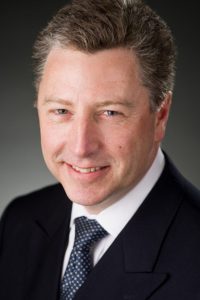 In the private sector, Amb. Volker has been a consultant to international business. He is an Independent Director of CG Funds Trust, and previously served as a Director of the Wall Street Fund. He also served as Managing Director, International, for BGR Group and as a Senior Advisor at McLarty Associates.

Ambassador Volker was a career member of the U.S. Senior Foreign Service, with over 23 years of experience working on European policy under five U.S. Administrations. He served as Ambassador to the North Atlantic Treaty Organization (NATO) from July 2, 2008 until May 17, 2009 – straddling the transition from the Bush to the Obama Administrations. His tenure at NATO saw Russia’s invasion of Georgia, the ramp up of military efforts in Afghanistan, the return of France to NATO’s military structure, the enlargement of NATO to 28 members, and NATO’s 60th Anniversary Summit in Strasbourg, France.

From July 2005 until June 2008, Ambassador Volker served as Principal Deputy Assistant Secretary of State for European and Eurasian Affairs, responsible for U.S. policy on U.S.-European Union relations, NATO, the OSCE, and our numerous bilateral relationships. He oversaw strategic planning and congressional relations, and was responsible for management of roughly 78 overseas posts, 300 domestic employees, and a budget of $400 million. Ambassador Volker previously served as Acting Senior Director for European and Eurasian Affairs at the National Security Council (NSC). He served at the NSC for four years, where he oversaw preparations for the Prague (2002) and Istanbul (2004) NATO Summits.

From 1999 to 2001, Ambassador Volker was Deputy Director of the Private Office of then-NATO Secretary General Lord Robertson. As a State Department Legislative Fellow in the U.S. Senate from 1997-1998, Ambassador Volker worked on foreign policy matters for Senator John McCain.

Ambassador Volker has a B.A. from Temple University and an M.A. in from the Elliott School of International Affairs at George Washington University. He speaks Hungarian, Swedish and French.